The Calling and the Cloth 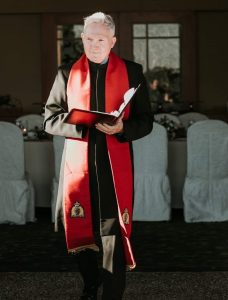 In the world of policing and pastoring, most follow the pattern of cop first, then clergy following retirement from policing. My journey is rather circuitous in that I was ordained as a parish clergyman (pastor) prior to answering the other call on my life which was policing.

I pastored for almost 10 years before becoming a police officer with Edmonton Police Service. During that time, I was invited to be on the selection committees for two successive police chaplains. The last chaplain I was part of the selection team for is still serving the members in EPS. I also took part in police chaplaincy duties during various chaplaincy absences.

Frankly, what I did find was that being a pastor is truly what equipped me to hit the ground running in my law enforcement career. I saw that both callings were about encountering people at their most challenging, painful and vulnerable moments. I also saw that members of both the police and clergy communities were often seen in a similar light by those on the ‘outside’.

The other truth I encountered is that in both professions, your services are not typically desired or regarded by society until they are in fact required. Make the arrest, calm the victim, execute the next of kin death notification, conduct the wedding, oversee the funeral. All necessary aspects of both callings. All necessary for the moment. Then leave the scene only to be considered for the next crisis or rite of passage.

Curiously, in my 20 plus year journey of being a police officer, I actually did find myself in the unique predicament of arresting past parishioners. My former parish was in an extremely broken part of north Edmonton which at one time had the highest concentration of single-parent families in Canada. At times some of those troubled souls ended up in handcuffs in the back of my police car. It was not uncommon to read my captives their respective rights and cautions only to be followed by a short prayer. Ah, the rich tapestry of life.

Following my retirement out to Vancouver in 2013 I found myself once again working in the world of law enforcement. This time from a different perspective. I was employed on the security team at one of the Fairmont Hotels (Vancouver has 4) and then program manager of a police studies program at a local community college.

It was also during this time I engaged with Clergy Memorial Support Church. This was indeed an answer to my prayers regarding being credentialed by a faith community that allowed its clergy to perform same-sex marriages. I was also asked to consider the role of chaplain for the Burnaby RCMP which is the second-largest RCMP Detachment in Canada. I was subsequently ordained and credentialed as an Institutional Chaplain.

During my time as a chaplain, I have conducted wedding services for Fairmont Hotel colleagues, former police studies students as well as members of the RCMP and Vancouver Police Department. I also write weekly messages for both sworn and civilian members of the detachment which have been received warmly. Clearly, my past experiences as pastor and police officer have afforded me the insights and credibility necessary to be a trusted member of the law enforcement family.

Recently I have enrolled in the Simon Fraser program of studies called First Responders Trauma Prevention and Recovery. I concluded my first course on Personal Resiliency receiving an A+ grade. Clergy Support Memorial Church assisted me in the costs of this course. Onward to the next one. Stay tuned.

I conclude these remarks in anticipation of a pending long-distance conference communion call this afternoon. A retired officer in EPS, who is now a chaplain, and I will be leading a former colleague in a communion celebration. This man’s son recently died by suicide. The calling and the cloth of both policing and clergy are more intertwined than many might know.